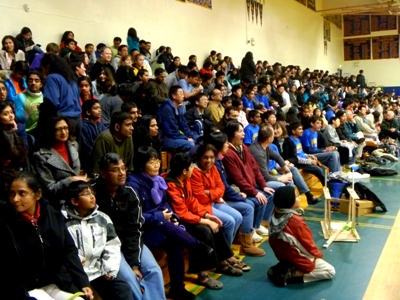 Last year I wrote about Science Olympiad, an amazing science-focused competition for middle and high school kids.  I was surprised by the fact that the vast majority of participants were Asian, and was quite happy to see that this population group cares about their children’s future and is connected to the global reality, in which engineers and scientists drive innovation.

This year, you could barely find a white person in the audience. Try to look for them in the picture above. These blond people in the top row? they’re immigrants from Sweden. As the 2010 census indicates, white people are leaving the Bay Area en masse. Even with this trend in mind, I can’t explain the dearth of non-Asian’s at Science Olympiad. I’m pretty sure the population makeup is similar in other science related events. While this spells bad news to white children and their parents, it’s great for Silicon Valley at large. Research shows that immigrants are more likely to be entrepreneurs, especially in the valley.

As I said last year: “I’ve seen the future of Silicon Valley, and I’m happy to report that it’s multicultural, passionate, and hard working.”